Film Review: THE FAULT IN OUR STARS 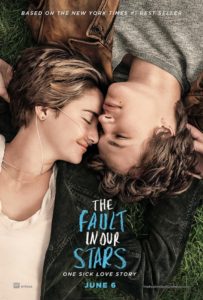 Anyone who has seen the trailer for The Fault in Our Stars know that this movie is a weeper. A romance about kids with cancer certainly sounds like it should produce tears and, for the record, it does. There was a moment during the screening I attended when I was surrounded by the sounds of people crying. They couldn’t quite drown out my own sniffles and gulps, though.

So this is not a spoiler:  unless you have a heart of stone, you will cry during The Fault in Our Stars. What makes the movie worthwhile is not that that it is sad, but that it is also thoughtful, natural and funny. There are moments when wry humor and heartbreak are woven seamlessly together. That’s not an easy feat to pull off in a film, especially when – remember – these are kids with cancer. On a formal date the central couple discuss the experience of buying their own funeral clothes, a terrible thing for the viewer to contemplate. And yet the exchange ends with a genuinely funny take-down from the female lead. That’s high wire filmmaking of an admirable kind.

What makes the movie worthwhile is not that that it is sad, but that it is also thoughtful, natural and funny.

The Fault in Our Stars is based on John Green’s wildly popular young adult romance novel. Shailene Woodley is outstanding as Green’s heroine, Hazel. Woodley’s Hazel is unsentimental in her own attitude toward the illness that she is sure will ultimately take her life. She resents platitudes and empty optimism and fights against attending a teen cancer support group. But Hazel is not hardened. She is deeply empathetic to her parents’ plight (“The only thing worse than having cancer is having a kid with cancer.”) and attends the support group for their sake. It’s in support group that Hazel meets Augustus “Gus” Waters (Ansel Elgort). Gus takes an immediate shine to Hazel and swamps her with his adolescent overconfidence and charm. 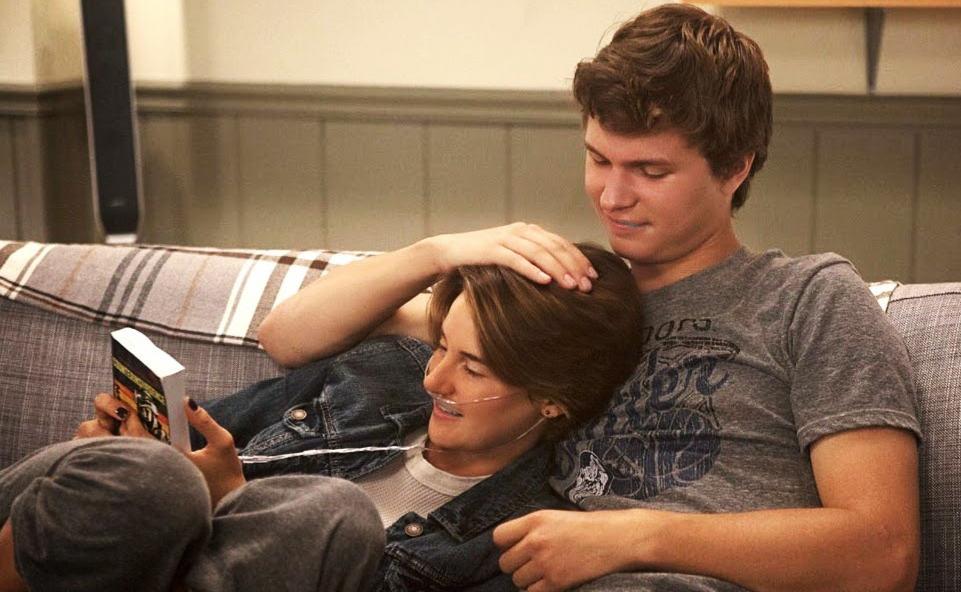 Gus is a unique character and, perhaps, the kind who exists only in books and movies beloved to teenage girls. He adores Hazel with no sense of proportion. When she tries to rebuff him by telling him that, dying as she is, she will break his heart, Gus responds with, “It would be a privilege to have my heart broken by you.” He is all sweet gestures and goofily florid speech; but Gus is funny and there is an openness to his boyish face that not only wins over Hazel but the audience as well.

Seeing how completely Gus is willing to build his life around Hazel, I was reminded of another teen romance leading man: Lloyd Dobler. In Say Anything (1989) John Cusack created a character who can still make women of a certain age woozy at the mere mention of his name. Like Augustus Waters, Lloyd Dobler devoted himself to the love of his life, Diane Court (Ione Skye), with total abandonment. Near the end of Say Anything Lloyd tells Diane’s father, “What I really wanna do with my life, what I want to do for a living, is I wanna be with your daughter. I’m good at it.” 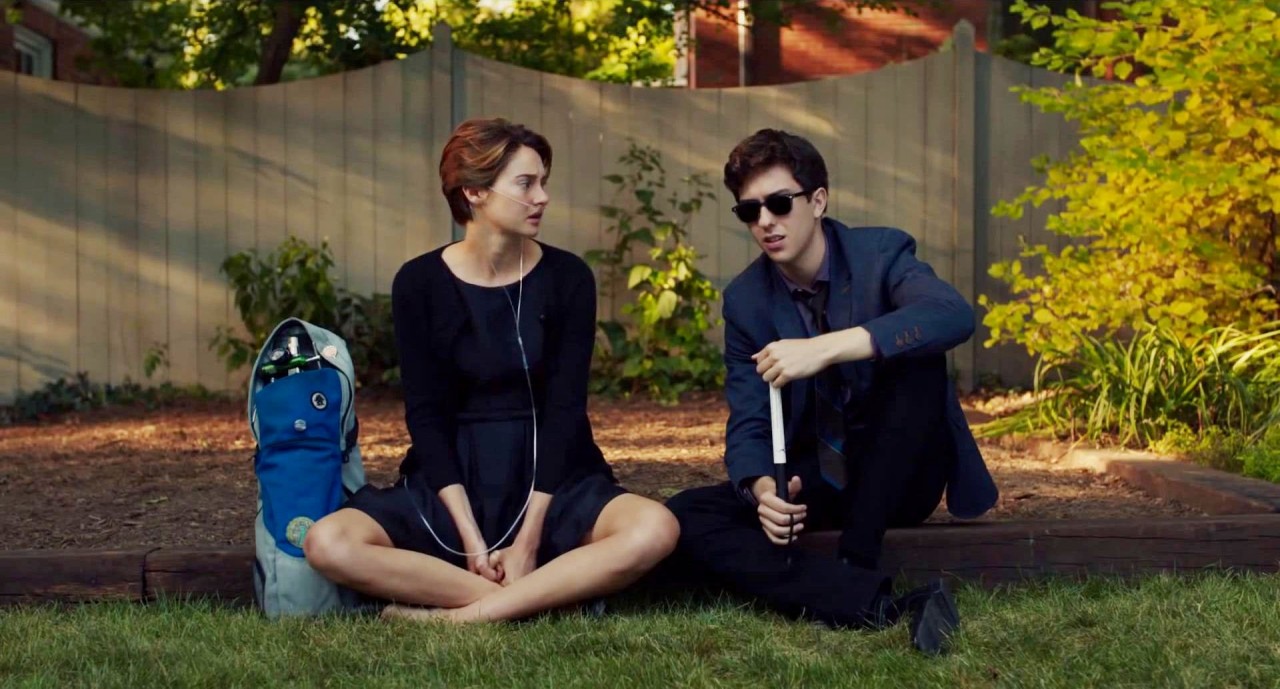 Augustus Waters is good at being with Hazel. He, too, is a cancer survivor – a former basketball star who lost a leg to bone cancer. But his own health concerns, family, and interests are pushed aside in deference to his love for Hazel. The Fault in Our Stars even seems to acknowledge the Dobleresque quality of this romance as Hazel’s opening voice over narration assures us that in this story things won’t be fixed “with a Peter Gabriel song”. Nevertheless, the movie is not a particularly gritty depiction of illness and death. The soundtrack, featuring artists like Ed Sheeran and Ray LaMontagne, is lilting and lovely. A trip to Amsterdam to meet Hazel’s favorite author (played with dissolute bile by Willem Dafoe) manages to make even a trip to the Anne Frank house an ethereal and romantic setting.

What keeps The Fault in Our Stars from sliding into simple melodrama is Hazel’s steady commitment to realism, and the fact that Gus is a bit less the chivalric knight than he wants to be. He has his own fears and weaknesses, chief among them “oblivion”. The Fault in Our Stars gives considerable space to the question of meaning in life. Religion and the afterlife are discussed, particularly as the support group meets in “the literal heart of Jesus”, but ultimately are discarded as poor coping mechanisms for facing annihilation. It is only in love itself that Hazel and Gus find something stronger than death (an idea that is, ironically, quite biblical). 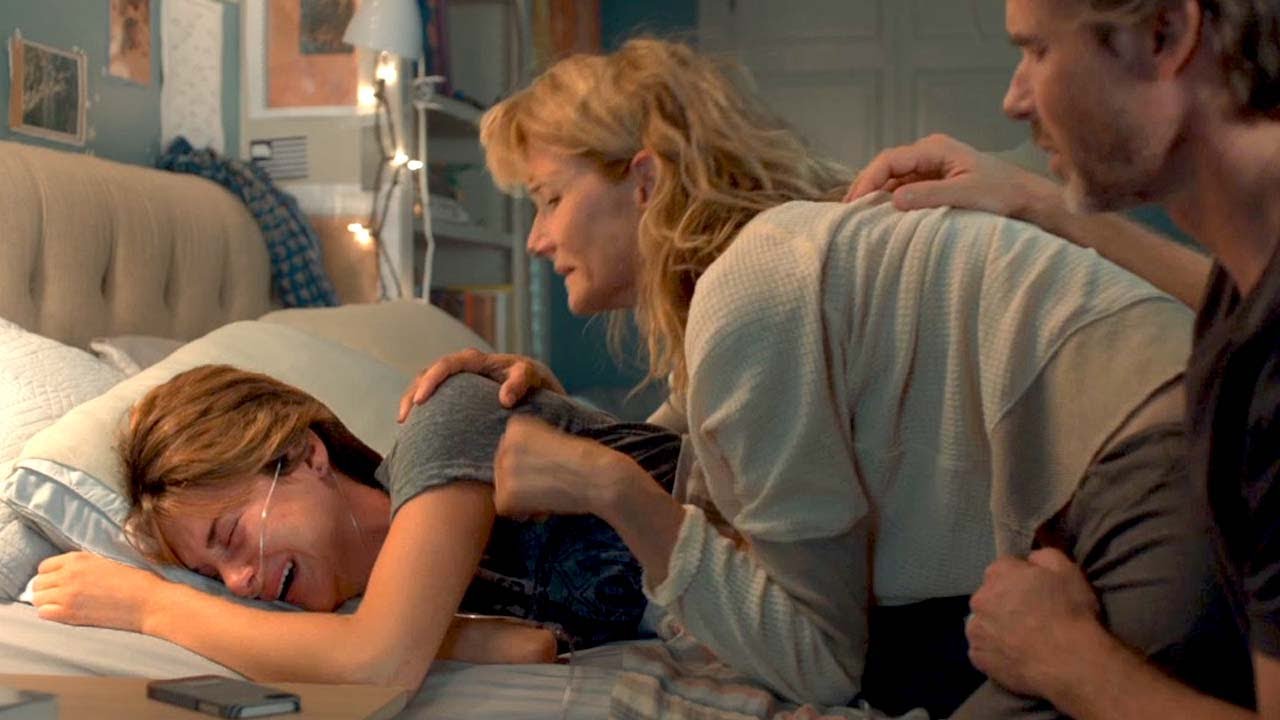 Hazel’s parents are played with compassion by Laura Dern and Sam Trammell . What is the appropriate way to parent in the face of death? Hazel worries that her parents will fall apart if she dies:  her parents worry that she will feel abandoned if they consider a future without her.

Nat Wolff is endearing as Gus’s friend, Isaac, another cancer survivor. That The Fault in Our  Stars knows a thing or two about real teenagers is demonstrated by Isaac’s reaction to a breakup: “I just want to cry and play video games.”

The Fault in Our Stars has a fine writing pedigree with a script by Scott Neustadter and Michael H. Weber ((500) Days of Summer, The Spectacular Now). They’ve already demonstrated – and show again, in this film – that they understand the irresistible bravado and narcissism of youth. Josh Boone (Stuck in Love) directs without a lot of flair, but he does let his stars shine. He seems especially attentive to Woodley’s pale but lovely face.

Whether the universe is indifferent to us and life ultimately meaningless, as Hazel believes, or whether “the universe wants to be noticed” as Gus suggests, is perhaps too deep a question to be settled by two sick teenagers in love. But The Fault in Our Stars takes the question, and its characters, seriously.  It earns the tears that will inevitably follow.